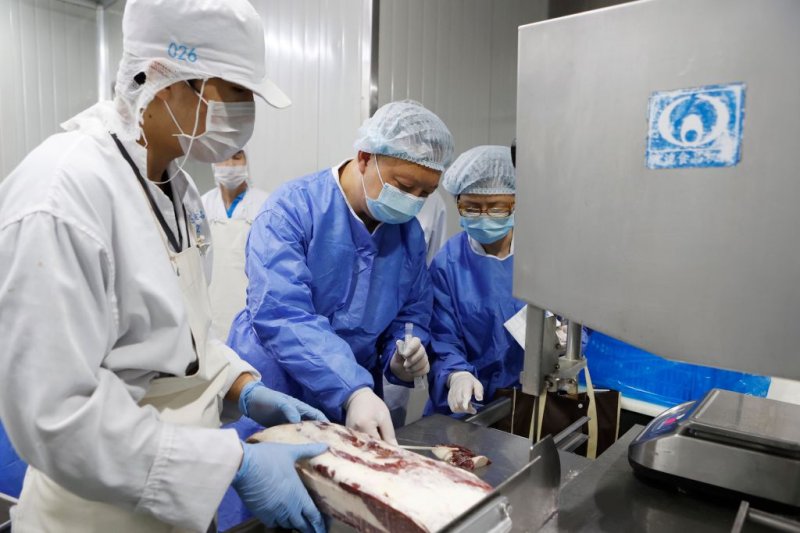 They’ve reportedly found it on packages of Ecuadorian shrimp, squid from Russia and Norwegian seafood.

Since June, Chinese health authorities have been detecting genetic traces of SARS-CoV-2, the virus that causes COVID-19, on refrigerated and frozen foods from around the world. Then, on Oct. 17, the Chinese Centers for Disease Control (CDC) announced it had isolated active SARS-CoV-2 on packs of imported fish. The agency says this world-first discovery, made while tracing a recent outbreak in Qingdao to two dock workers, shows contaminated food packaging can cause infections.

While it remains unclear if the dock workers actually contracted COVID-19 from the seafood they were handling, the government is stepping up precautions. Qingdao will now scrutinize all incoming frozen food (after testing all 9 million residents), while the Beijing city government has urged companies to avoid importing frozen foods from countries badly hit by the pandemic — though it did not specify which ones.

Concern over possible transmission through imported food is running high in China, which has nearly stamped out domestic transmission of the pathogen. It is one of the only countries to impose wide-scale coronavirus inspections on incoming shipments.

Elsewhere, health authorities have been more skeptical. The U.S. Centers for Disease Control says there is “no evidence” to suggest food is associated with spreading the virus, while the World Health Organization (WHO) says it’s not necessary to disinfect food packaging. New Zealand meanwhile ruled out a theory that an August outbreak was connected to a cold-chain storage facility.

China’s CDC says 670,000 samples from frozen foods and packaging had been tested for COVID-19 as of Sept. 15. Reportedly, only 22 of them were positive (and prior to the Qingdao case it was not clear if any of the detected coronavirus was still active when thawed).

Several health experts have disputed the necessity of such precautions. While cold temperatures can preserve coronaviruses, they remain doubtful food and its packaging pose a major threat.

“It’s theoretically plausible, but the risk is much lower than the other more established routes of transmission for this virus,” says Siddharth Sridhar, a microbiologist at the University of Hong Kong (HKU).

What has China found?

China stepped up monitoring of imported foods after a second wave in June that infected 335 people was linked to Beijing’s sprawling Xinfadi market. The outbreak, which broke the capital’s run of 56 consecutive days without any new local infections, prompted a partial shutdown of the city and a probe into the origins.

Authorities suggested supplies of salmon from Europe may have been the source after the virus was reportedly discovered on a filleting board. This led to a temporary freeze on salmon imports, with repercussions for exporters in Chile, Norway, the Faroe Islands, Australia and Canada. Although others have disputed that the fish were to blame, investigators in China have since doubled down on the potential culprit.

Also in June, China suspended poultry imports from a Tyson Foods plant in the U.S. amid concerns about an outbreak at the facility. And in Tianjin, a major port, authorities reportedly began requiring coronavirus tests for all meat and seafood containers.

At the time, Li Fengqin, the head of the lab at China’s National Center for Food Safety Risk Assessment told reporters that the possibility of contracting the virus from frozen food and packages could not be ruled out.

Other cities jumped into action. In August, Shenzhen—the booming technology hub that borders Hong Kong—set up a central warehouse where all imported food is screened before being sold.

As of early Sept., China had temporarily banned imports from 56 companies in 19 countries, including from the U.S., Indonesia and Europe.

Cui He, president of the China Aquatic Products Processing and Marketing Alliance, acknowledged that it was impractical to institute a total ban on imported frozen food. “More than 100 countries worldwide export frozen seafood to China,” he told state-run media.

Exporters of meat, dairy and other food items have instead been asked to sign documents declaring their products have not been contaminated by coronavirus.

Such scrutiny has drawn flak from industry bodies. In September, the International Commission on Microbiological Specifications for Foods called restrictions around food imports “not scientifically justified.”

Getting COVID-19 from food or packaging isn’t easy

Getting COVID-19 from food packaging is no easy matter and, while possible, depends on a complex series of events, health experts told TIME.

First, an infected person would have to cough or sneeze on packaging. Then, while the virus was still active, someone else would need to touch that packaging before touching their own eyes, nose or mouth.

“Everything we have come to know about this virus indicates airborne person-to-person is the mode of transmission,” says Emanuel Goldman, a professor of microbiology at Rutgers University.

Researchers are still studying how long the virus can remain active on food surfaces in varying temperatures. According to the WHO, coronaviruses in general are very stable in a frozen state, and studies have even shown survival for up to two years at -4°F.

But even if food or packaging does test positive, that doesn’t mean it’s infectious.

“The most commonly used tests can tell us that there has been some viral components on the package, [but] we do not know the state of the virus,” says Sarah Cahill, a senior food standards officer at Codex Alimentarius Commission, the body responsible for developing food standards under the WHO. “Was it still intact? Was it still viable? Was it still capable of causing infection?”

How to stay safe

The U.S. Food and Drug Administration says it is aware of China screening incoming produce, seafood and meat for COVID-19. But in a statement emailed to TIME, a spokesperson says, “Currently there is no evidence of food, food containers, or food packaging being associated with transmission of COVID-19.”

Sridhar of HKU does not recommend widespread screening of imported food items, which he likens to “looking for a needle in a haystack.”

Dale Fisher, a professor of medicine at the Yong Loo Lin School of Medicine, National University of Singapore, says China’s concern stems from a different approach to the virus than much of the rest of the world is taking.

He says China has “chosen to monitor this because they have zero tolerance for cases. If you’re not aiming for zero, then there’s a different risk tolerance.”

In any case, regular consumers should not be worried, he says.

“By the time food gets to a consumer it has been stacked and moved around enough to see the virus very diluted and unlikely at an adequate dose to cause infection.”

To avoid getting coronavirus, health experts continue to advise people to wash their hands with soap and water and avoid touching their eyes, nose and mouth.