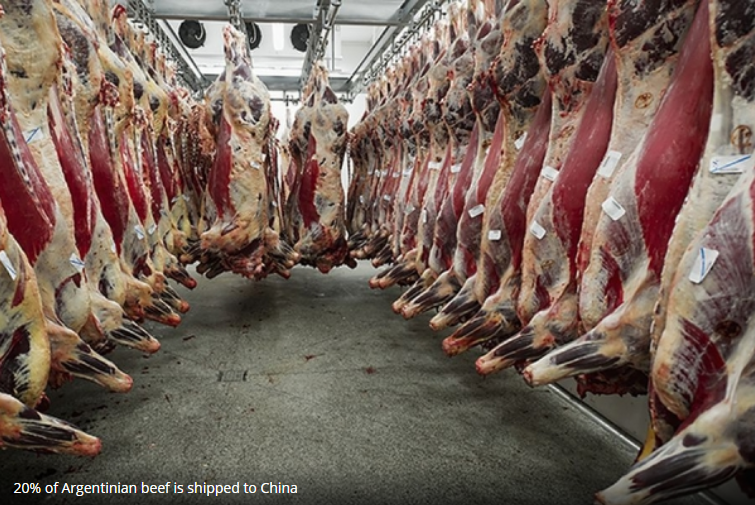 The Asian country is the world’s largest destination for animal protein and it will continue to increase its role in the global meat market.

China holds the title of the world’s largest buyer of meat and that probably it won’t change in the near future, as the ASF situation in the country does not seem to have a solution in a short-time. Besides pork, China is currently increasing its imports of beef to levels never seen before due to the animal protein shortage created by the African Swine Fever.
Customs data shows that in July, China imported 152,000 tonnes of beef, an increased of 82% compared to the same month last year. Also, in June, Argentina was ranked the main supplier of beef for the Chinese market, with a volume of 32,660 tonnes, up by 135% than a year before. It was followed by Uruguay, with 27,485 tonnes (+60%), Brazil with 25,384 (+1%), Australia with 23,210 (+55%) and New Zealand with 20,222 (+108%).
As De Frente Al Campo magazine mentioned, Argentina has only 20 plants authorized to export beef in the Chinese market and intends to add 9 more to the list in the future. Nevertheless, China’s demand for Argentinian beef is so strong that 20% of the beef produced in the South American country is exported in this market.
However, the official suppliers of beef must face strong competition from illegal imports of Indian meat. Channeled into China through Vietnam, Hong Kong or directly from India, smuggled meat volumes may reach 700,000 tonnes, considering the fact that in the first 5 months of this year water buffalo meat exports from India to Vietnam have reached 193,000 tonnes. via @euromeatnews