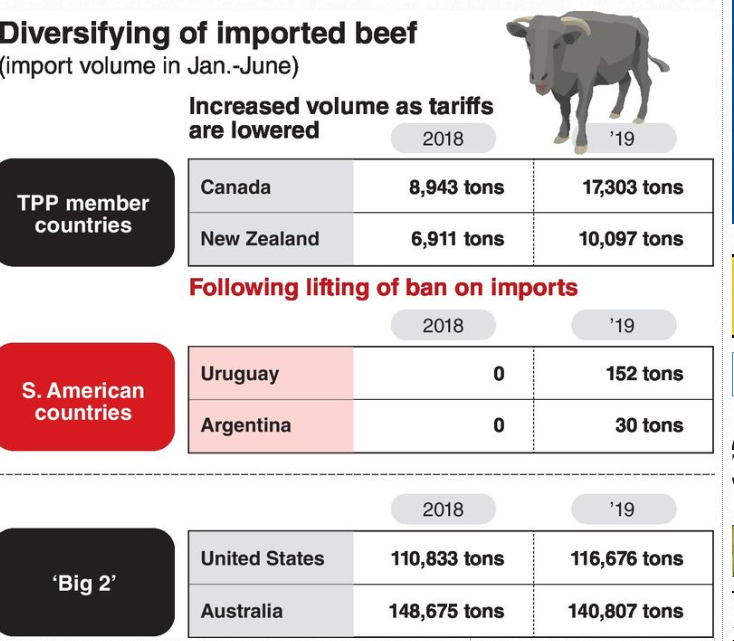 Since the Trans-Pacific Partnership came into effect, a wider variety of imported beef has been making its way onto the tables of Japanese households.

Products from Canada and New Zealand have been increasing, and “new forces” from South America have appeared after bans on imports from those countries were removed.

Up to now, the United States and Australia almost exclusively dominated beef imports into Japan, accounting for 90 percent of the total. But the grip of the “Big 2” is being loosened by Canada and New Zealand, which saw their prices go down after tariffs on their beef dropped from 38.5 percent to 26.6 percent starting in April, after the TPP took effect at the end of last year.

Canadian beef is regarded as similar in terms of quality to that of the United States, which Japanese consumers prefer. According to trade statistics of the Finance Ministry, the import volume in January-June this year was 17,303 tons, up 93 percent from the same period last year. Imports of New Zealand beef, known for its high lean content, rose 46 percent to 10,097 tons.

At one supermarket in Tokyo, Canadian chuck loin sells for about ¥258 per 100 grams. “It is about the same price as the U.S. beef, so it’s not out of reach,” the purchasing manager said.

South American imports are expected to show growth gradually. Beef imports from Uruguay and Argentina had been banned due to past outbreaks of foot-and-mouth disease, an infectious disease affecting livestock. But the government, receiving assurances of safety, lifted the bans on beef from Patagonia in southern Argentina in June 2018 and from Uruguay in February this year.

Ito-Yokado Co. was the first major Japanese retailer to sell Argentine beef, starting sales in June over a limited period. “It has a high content of lean meat and a soft texture, so you can sense the true flavor of the meat,” a company official said. The company intends to consider future sales of the product.

Under the TPP, beef tariffs will be lowered in stages to 9 percent. By increasing the volume, South American beef can be imported at lower prices than that from the United States and Australia. More varieties of imported beef can then be expected to lead to lower prices through competition.

For the United States, the changes in the Japanese imported beef market is a point of concern. By withdrawing from the TPP, it stands to find itself at a disadvantage in terms of price and lose market share in Japan. The administration of U.S. President Donald Trump is expected to increase pressure in trade negotiations for Japan to open its markets.