Import growth has been led by Brazil and, to a lesser extent, Argentina, with trade increasing 131% and 51% respectively

After falling drastically through May, US beef supplies have recovered rapidly, while Brazilian exports are yet to reflect any indication of a reduction in cattle slaughter. Although many underlying drivers of strong demand remain largely intact, competition in key export markets may increase in coming months.

At a time when Australian beef supplies are tightening, US product will likely compete strongly in Japan, Korea, Taiwan and the US domestic market to varying degrees in the coming months. Meanwhile, Brazil and Argentina will continue expanding their presence in China and increase enquiries into other major Australian export markets.

Up to April, combined shipments into North Asia had notched the strongest start to the year on record, with Japan imports surpassing the previous peak in 2003 (prior to bovine spongiform encephalopathy trade disruption). However, these figures are yet to reflect the sharp contraction in US beef production in May and early June, nor may they fully reflect any ongoing disruption in the foodservice sector from COVID-19. While the economic fallout from COVID-19 shutdowns is still to be verified, cases in Japan and Korea remain low compared to other markets, while Taiwan has recorded very few cases to date. 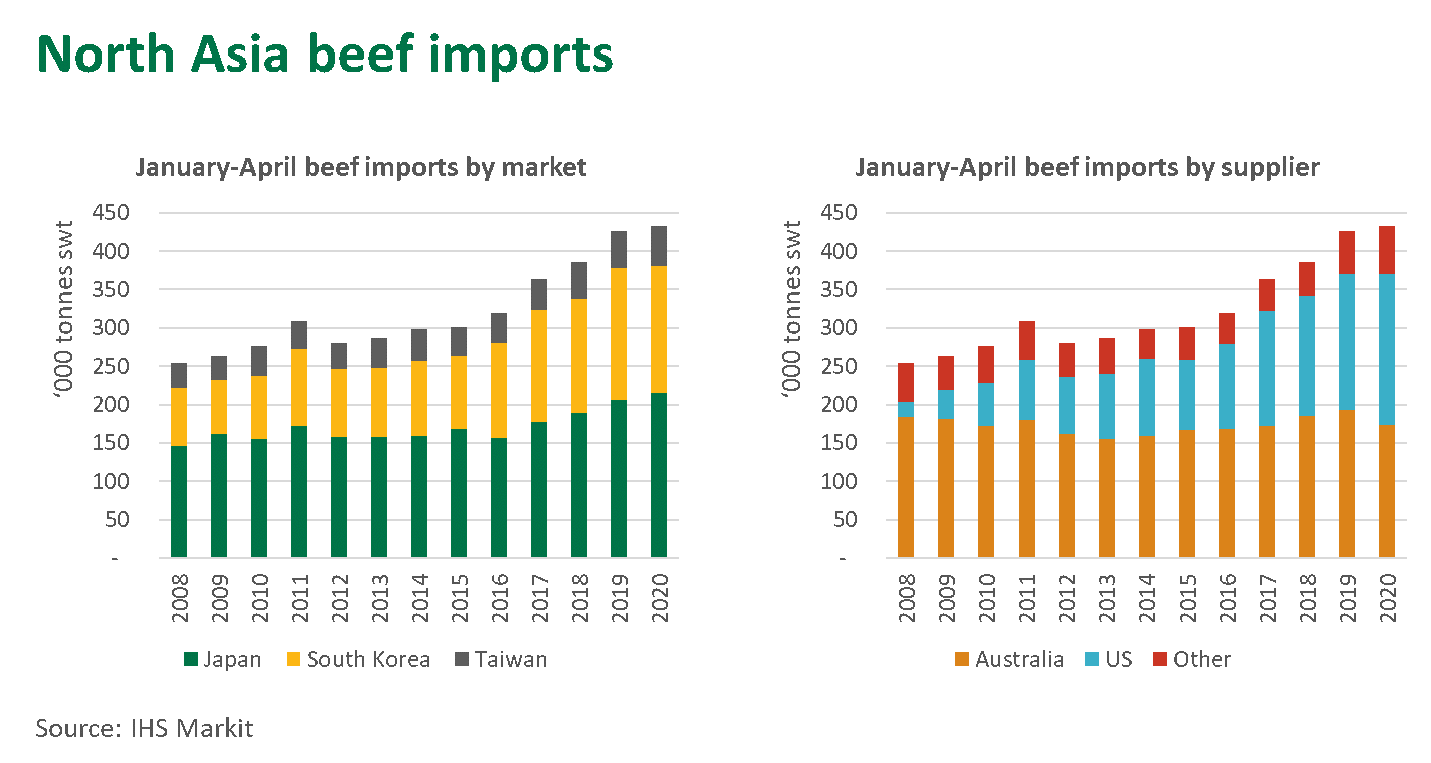 Conditions to capitalise on the US beef shortfall in Japan were not ideal. Australian cattle on feed numbers at the start of April were back 5% year-on-year and 12% below where they opened 2020, limiting grainfed supply. Meanwhile, COVID-19 cases spiked in mid-April, spooking the Japanese trade and triggering more cautious buying behaviour in late April and May. About two-thirds of Australian beef in Japan is estimated to be consumed through foodservice channels.

In addition, Japan imported a lot of US beef over the first four months of the year due to a reduction in tariff rates, which bolstered inventories ahead of the collapse in US slaughter capacity. Japanese imports of US beef were up 13%, or 10,000 tonnes shipped weight (swt), year-on-year over the calendar year-to-April period. Meanwhile, national stocks of beef in cold storage at the beginning of April were up 9%, or almost 11,000 tonnes year-on-year. As such, Australian grainfed beef exports to Japan eased 5% year-on-year in May.

In contrast, Australian grainfed and grassfed beef shipments to Korea were strong through May. Grainfed exports to Korea were up 17% year-on-year in May (compared to 2% across all markets) while grassfed shipments were back just 4% (compared to 8% across all markets). Australian grainfed ribs and intercostals, which account for a large part of US exports to Korea, found particularly strong support, up 53% year-on-year in May. Whole chucks, briskets and even cube rolls also found solid demand from Korea.

Australian exports to Taiwan were also robust in May, up 5% year-on-year, and grassfed shipments recorded particularly strong growth, up 17%.

June trade data, when it becomes available, may be more telling of the trade shortfall caused by a collapse in US production, given the time lag between US slaughter and product arriving in Asian markets. Weekly US beef exports (as reported by the USDA and only covering beef cuts) indicates shipments remained low up to mid-June. However, the USDA reported a 10,000 tonnes swt week-on-week spike in export volumes for the seven days ending 18 June, an 84% rally on the prior four-week average.

Weekly exports to Japan and Korea were up 66% and 90% respectively on the previous four-week average. Given it takes a couple of weeks for US export figures to translate into North Asia imports, the current recovery underway will likely be first witnessed in July import figures. In the meantime, cheaper US beef will be feeding into North Asian trading decisions and competing strongly with Australian product.

As highlighted in this separate article, US supplies are expected to remain elevated over the next 12 months as the industry works through the backlog of cattle.

China imports yet to slowdown

While COVID-19 has had a profound impact on the retail and foodservice landscape in China, the rate of beef imports are yet to slow, with May marking the 47th consecutive month of year-on-year growth.

Calendar year-to-May China imports were up 45% year-on-year, at 821,000 tonnes swt. Import growth has been led by Brazil and, to a lesser extent, Argentina, with trade increasing 131% and 51% respectively. China imports of Australian beef also recorded solid growth in the first five months of 2020, up 35% year-on-year, but figures are yet to reflect the trade slowdown from the temporary delisting of four plants.

Supported by an emerging middle class and supercharged by the spread of African Swine Fever (ASF), China has emerged as the largest imported beef market over the last few years. While COVID-19 has dislodged ASF from media headlines, it remains as critical as ever in underpinning global meat markets. While there have been some reports of integrated pig growing facilities operating successfully under increased quarantine measures, the pig herd remains severely depleted compared to pre-ASF levels. Following the seasonal post-lunar new year lull and the first wave of COVID-19 disruptions, China pork prices have been rising since late May and the national benchmark indicator was up 88% year-on-year last week.

The recent rise in COVID-19 cases out of Beijing is of some concern for meat demand in China, however, imports remained strong through the initial wave across the country and during the subsequent lockdown.

Five months into the new year and following the signing of the US-China Phase One trade deal, only minor volumes of US beef have yet to enter the China market. Year-to-May China imports of US beef were up 62% year-on-year, at 4,700 tonnes swt, however this still accounts for less than 1% of the total imported beef market. US pork and poultry into China, on the other hand, have recorded solid starts to the year, with pork volumes up six-fold over the first five months at 333,000 tonnes swt, and poultry re-entering the market after a previous ban at 62,000 tonnes swt. 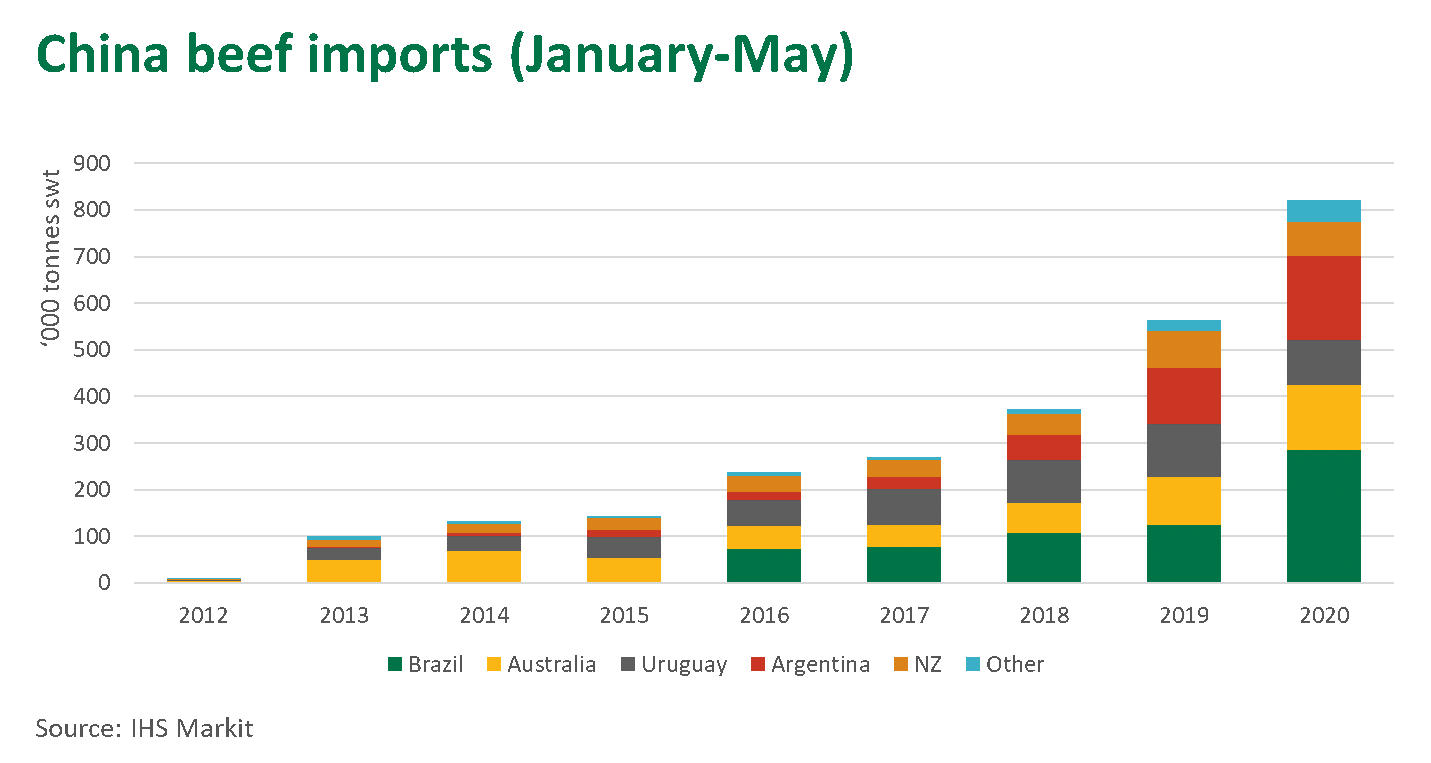 Australian beef export to the US in May jumped 32% on April volumes, as end-users responded to very short supplies and unprecedented price rises over the month. However, with US beef production now recovered and wholesale prices back near pre-crisis levels, import prices have eased.

A range of factors will be at play over the second half of 2020 that will drive Australian lean beef exports to the US, including:

The graph below illustrates the long-term relationship between the Australian medium cow indicator and the price of US imported 90CL. Shifts in the US 90CL price provide an indication of the level of US demand. In the past 10 years, outliers in the pricing relationship have occurred due to demand forces, such as that from China in the second half of last year, or supply factors such as intense herd rebuilding and destocking in Australia and the US.

So far this year, average cow and imported 90CL prices have closely mirrored the historical relationship (indicated by the point ‘2020 YTD’ in the chart), however, more recently strong restocker demand in Australia has pulled the relationship away from the mean (indicated by point ‘2020 June’). This is similar to what was seen in 2016 and 2017 when Australia’s herd was recovering from drought.

If Australian cow and US imported 90CL prices continue to deviate from the historical relationship, demand from US grinders will be tested. It may even provide impetus from some to look outside Australia and New Zealand for lean beef, such as Brazil and Argentina which both now have access, albeit limited, to the US market. This risk is highlighted in this week’s US imported beef market update by Steiner Consulting, which, if combined with disruption to the all-important China market, flags that the South Americans may begin to look north.

The other major unknown in the US market is the potential for a second wave of COVID-19 cases to ripple through certain states. As highlighted below, US foodservice traffic had begun to re-emerge from state-wide lockdowns, however, the recent spike in daily cases may test this recovery. For instance, California, Arizona, Texas and Florida have all re-imposed some restrictions in response to the spike in cases over the last week.