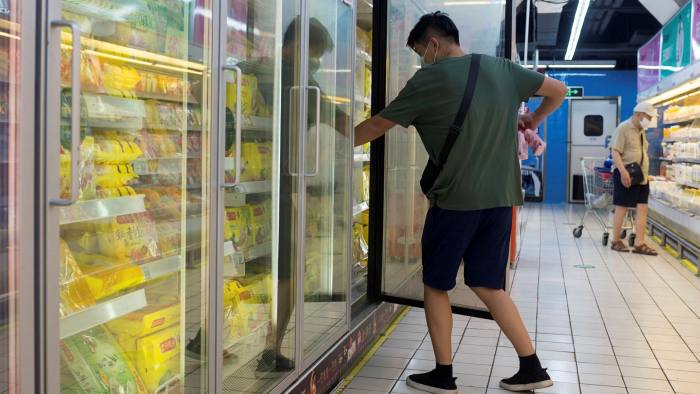 Christian Shepherd in Beijing and Qianer Liu in Shenzhen

The capital of China’s southern Guangdong province has suspended imports of frozen meat, fish and seafood from coronavirus-hit countries, as Beijing intensifies scrutiny of refrigerated food as a possible carrier of the disease.

Guangzhou authorities on Sunday announced the temporary ban from virus hotspots, without naming specific countries, and ordered all workers who had come into contact with frozen goods to undergo RNA tests for Covid-19.

Guangdong is China’s most populous province with 113m residents and is an important manufacturing hub responsible for more than a 10th of the country’s economic growth. In the first half of 2020, Guangzhou, the provincial capital, imported more than $665m in frozen meat, fish and seafood.

Last week Shenzhen, the Guangdong city on the border of the Chinese mainland with Hong Kong, said that a sample collected from imported frozen chicken wings from Brazil had tested positive for the virus.

UBI is helping meat importers/traders and suppliers with quality controls in real-time with reports within the same day of inspections and adapting all the covid protocols to it, try 1 today!

The Brazilian government rejected the claims, pointing out that World Health Organization experts had said there was no evidence that frozen food or its packaging were a risk factor in spreading the virus.

But Chinese officials continue to raise concerns about the trade of refrigerated food. Since late June, when Chinese customs launched widespread swabbing of imported goods, there have been 10 incidents of frozen goods or their packaging testing positive.

Xi Chen, a public health policy academic at Yale university, said that the positive tests were probably triggered by lingering genetic material of a dead virus, which would be incapable of infecting humans.

“China thinks it has the virus under control so they want to use any means possible to prevent a return . . . but we need to look at the science and work out measures that do not disrupt international trade,” Mr Chen said.

He added that global monitoring of imports by epidemiologists was needed to confirm whether the concerns were warranted.

A Guangdong official who works on coronavirus prevention said he did not expect a blanket ban, but that at this initial stage it was necessary to be more stringent.

“Right now there is a lot we have yet to clear up, including the source of the infection and the scope of spread,” said the official, who declined to be named. “As it happened in Shenzhen, a place with a huge flow of people, we are to an extent racing against time.”

Guangdong has launched a testing drive spanning the whole supply chain of a groceries and restaurant chain backed by technology company Alibaba, after one of its employees in Shenzhen was found to be infected.

On Saturday, Fresh Hippo announced it was temporarily closing 21 stores across Shenzhen. Authorities have dispatched teams to 36 Fresh Hippo stores as well as 12 warehouses and processing plants across the province.

The chain of supermarkets and eateries, which offers fresh produce from stores in busy shopping malls, is a central part of Alibaba’s efforts to add bricks-and-mortar stores to its ecommerce empire.

Last week, Ecuador’s minister of trade said that a deal had been negotiated with China to restart imports of frozen shrimp from the Latin American nation. In July, China suspended some imports from Ecuador after samples collected from shipments tested positive for Covid-19.